Kin naming dreams, either in individual threads or grouped together.
Post Reply
67 posts 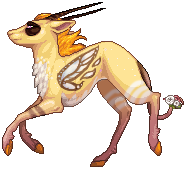 But the caves were dark and absent of the light she needed to grow. She knew she couldn't stay, but she was shaken by the idea of land scorched by the heat of the sun and frozen beneath the moon. Would it not be acrid? Would it not support her seeking roots?

There is more, she knew, there is someplace else.

And there, at the edge of her vision, the light flooded in, gold and warm. Tentatively, she sampled the heat on her bare skin, could feel her hooves beginning to sink into ground tempered by sun that gave life unknown to her, saturated in the rays of a moon that saw all in the cast of the night.

And here, she thought as she began to feel truly alive. Here.

It begins in the desert.

He wakes upon the sand and climbs the tall shifting dune. At his hooves, the desert sprawls, golden, undulating.

Far away a mountain rises, pierced by light.

He begins his journey.

Through day and night, past waterfalls of sand, rock pillars and floating beasts. To an underground path haunted by watchful guardians.

To the mountain base, hooves cracked and legs tired.

He heads upwards, onwards, his breath white as the snow begins to fall. Deeper and deeper, pushing forward despite the cold sinking into his bones.

The mountaintop is waiting.

The wind is howling, a blizzard blowing, making him stumble, pushed this way and that.

The last of his strength flees, leaving him bone-weary and numb.

The snow here is a gentle cradle.

It’s not cold at all.

The light is still calling from somewhere above, obscured by the pale world.

He dreams of the desert, the exultant joy, of flying, of falling, of stepping into the light, of coming home, a shooting star returning to where he began.

When he was born, his head was gray and unmarked. But as he grew, the fur turned white, like snow. He became well known as being patient and wise, a Totoma who could stand amongst the rocks and snow, using his colours as camouflage, so still and so silent he could easily blend in. Snowstripe they called him, for the distinctive marking.
word count: 62
Top

He grew up quiet, dark and brooding. He was distant in a way most kin weren’t. When he stalked prey, it was without passion and his deathblow was always swift and merciless. When he was older, he met a kin. They invited him to join them, told him his skills were important. They welcomed him into a cult that worshiped death and it was easy for him to strike down those who desired it. They called him Executioner and even when he finally left them, bored by the monotony of death dealing, he still kept it.
word count: 97
Top
Post Reply
67 posts